Josué was born into a Catholic family in Mexico City. When he was about 5 years old, Dan & Peggy Whitcher, U.S. missionaries to Mexico, met his parents and began to study the Gospel of John with them. Shortly after, in the fall of 1990, his parents were saved and God graciously changed their lives forever. Josué was saved during a youth camp after hearing a sermon from Romans 12 on "offering your life as a living sacrifice." Not only did he trust Christ as his Savior, but he surrendered to the ministry.

At the age of 12, Rebekah received Jesus as her Savior after a revival service at Grace Baptist Church in West Columbia, SC. She was baptized and began to grow in the Lord, serving in her church and witnessing to others. She had several opportunities to make mission trips to Hispanic countries and as early as eighth grade, God established in her heart a firm desire to reach the lost through missions. She purposed in her heart to marry someone who had a burden for Spanish ministries.

Josue and Rebekah met at college and were married after graduation in the summer of 2009. While Josué finished his Master's program, Rebekah spent three years teaching at Pensacola Christian Academy. During this time, we have served the Lord at Pensacola Baptist Temple, working in the music and the childrens' ministries, and in reaching out with the Gospel to our community. The Lord continued working in our hearts regarding hispanic ministries. We read an article in a magazine that talked about Mexico City as a "forgotten land," where many missionaries were leaving with no one to replace them. Through this and other circumstances, The Lord truly confirmed in our hearts that He wanted us to return to Mexico. We have been blessed with a three-year-old daughter, Natanya, and an eight-month-old, Santiago. We are so thankful for the Lord's working in our lives through deputation, and are eager to continue our ministry in Mexico City. 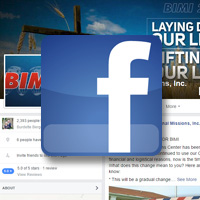 Keep Current with BIMI by liking us on Facebook.

BIMI's short-term missions program offers many different trips. By joining a Connect team, individuals will have an opportunity to use their talents and abilities for the cause of Christ.