In the traditional Samoan religion it is said the war goddess Nafanua predicted the arrival of a new religion which would replace the old, and when Christianity arrived on the islands many converted and saw this as a fulfillment of the prophesy. A group of islands in the South Pacific Ocean, Samoa has had a strong Christian heritage ever since. Although the first Europeans to arrive were Christian missionaries, Samoa passed from German control to New Zealand administration and then UN management until independence in 1962. The Samoan people comprise the second largest Polynesian group and the first Polynesian nation to reestablish independence. 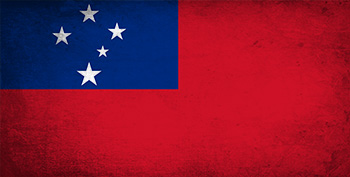 The Samoan economy is dependent on developmental aid, agriculture, and fishing. Agriculture makes up 90% of exports and employs 70% of the population. Tourism, offshore banking, and light manufacturing are also expanding. Many youth emigrate to New Zealand or American Samoa looking for work. There is a close link between Samoan society and Christianity: the national motto is “Samoa is founded on God”, and the constitution states the country is "based on Christian principles and Samoan customs".

While missionaries officially arrived in 1830, a number of Samoans had already become followers of Jesus due to shipwrecked sailors. Most Samoans converted to the new religion, and Samoan missionaries played a large role in evangelizing other pacific people groups. Today the population is 97% Christian. The church building is central to the Samoan village and is a center for recreation and social life. The villages also set aside time every day for prayer.

This does not mean that there is not work to be done, or no need for more laborers for Christ. Growing quickly, the Mormon Church sends and receives more missionaries to and from Samoa than any other faith. The Church in Samoa suffers from nominalism, and the various denominations are plagued by rivalry, pride, and conflict, which divide and weaken. Yet, Church attendance remains high, and the long lasting Christian tradition continues.

(Used with permission from www.prayercast.com/samoa.html.)

Throughout the years, many have sowed the seeds of the gospel, whereas others have come behind and have watered it. Now in this time, may the Lord rise up workers that can train, equip, and educate more national pastors, as well as help establish more Baptist churches. There is a harvest that is ready – it just needs more laborers. To inquire for more information regarding Samoa, please contact BIMI's Southeast Asia Director.
Missionaries in Samoan Islands: