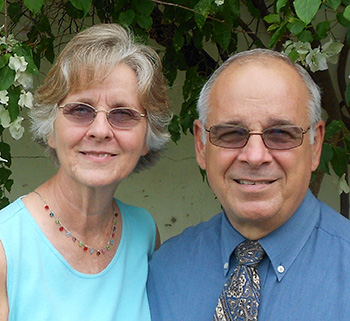 Jerry and Linda Baker grew up in Christian homes and actively served in their local Baptist churches, Jerry in Florida and Linda in North Carolina. Although both were professing Christians, they later realized they were not possessors of true salvation and made the decision to make that situation right.

Jerry and Linda met while he was stationed with the United States Air Force in Winston-Salem, North Carolina. They were married in June 1966 and stayed in the area until Jerry's honorable discharge in 1967. After a one-year contract with the space industry in the Washington, DC, area, Jerry took a job and moved back to Lakeland, Florida. They joined the Temple Baptist Church and began to serve as the youth leaders and youth Sunday school teachers.

Mission Conference time in 1980 was the turning point in their lives when they surrendered for full-time service as missionaries in Christian broadcasting. This resulted in relocating to finish college and prepare for this new ministry. They moved to Greenville, South Carolina, in January1972, and Jerry completed his degree in Broadcast Engineering at Bob Jones University in May 1975. While studying in college, the Bakers were introduced to a new missionary radio ministry, The Caribbean Radio Lighthouse (CRL), which was being started on the small island nation of Antigua, West Indies. Jerry got involved with the early activities of the missionaries and the shipping of much of the equipment for the station while still in school. Later, after graduation he made several trips to the island to help with the installing and maintaining of the station equipment.

In early 1979, the door opened for them to join the ministry as full-time missionaries. They joined BIMI in June 1979, raised their financial support, and arrived on the field April 16, 1982. For 33 years Jerry served CRL in different capacities as station engineer, Assistant Director, and Director. Linda worked with the station music library, taught young children, and acted as hostess for the many hundreds of visitors throughout the years. The Bakers helped cofound two Baptist churches. Jerry taught song leading in the local Baptist institute and served as song leader in at least three local churches at various times. They served as Sunday school teachers, youth leaders, and workers in other various capacities in their local church.

Due to medical issues, age, and insurance availability, the Bakers thought it best to return to the States. Jerry and Linda Baker served on the field until October 1, 2015, when they left the radio ministry to younger leadership. The Bakers were approved to serve as BIMI ARM (Assistance & Relief Missionaries) Personnel in January 2016. Because of their experience, they can help with short-term song leading, teaching, helping in maintenance, or assisting in most church positions on a limited basis in the United States, health permitting.